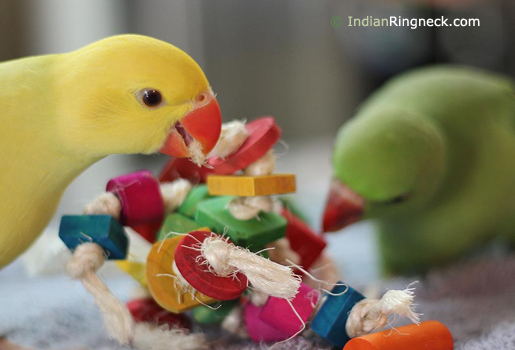 Indian Ringnecks in my opinion make excellent pets. They have stable personalities and can cope with minimal attention during busy times (does not mean they are content alone), and are great companions. These birds are stigmatized with a bad reputation of being impossible to keep. Avian breeders, who have had little experience with ringnecks, are usually quick to point out that ringnecks make horrible pets. This is untrue and I find that on the contrary they make marvelous pets. I believe not enough time and research has been invested into these parrots to make such a false statement. This bird is adored more for its mutations rather then its marvelous characteristics and pet qualities.

[body align=”left”] In general, IRNs (Indian Ringnecks) are not affectionate by nature. During the breeding season, which will vary form location to location, IRNs become affectionate and demand it. They are not as affectionate as some well known other parrots; however, there are those that always break the rule. It is important to understand that parrots have personalities much like humans and every bird is an individual. Many times, while reading articles or watching IRNs around their owners I’ll see just how affectionate they are. I then become delusional of the idea that ringnecks don’t like to be petted. Even though it’s said ringnecks do not like being petted, they NEED and crave social interaction.

Ringnecks are marvelous talkers. They can talk very well and hearing them talk can be an enjoyment. Some ringnecks start talking around seven months, while most start around a year. They talk clearly and can easily be understood by strangers. These parrots can easily keep up with their larger cousins. Both males and females are able to talk; however, the male seems to be more gifted.

It should be said that buying a parrot for its talking ability is not a smart choice or is it ethical. Too many times people buy parrots on impulse and the species ability to mimic speech. This impulse buying is common and the result is devastating. The parrot, who did not meet the owner’s expectations, is subjected to a life of boredom and usually goes from house to house. As stated above, each bird is an individual and some will not talk. Parrots should be purchased for their company rather then their talking ability.

Along with their ability to mimic speech rather well, the Indian Ringneck is an avid learner. These parrots pick up concepts extremely fast, along with tricks and behaviors. In Asia, these birds are used as performers to attract spectators as they pass by shops. These parrots love to be challenged mentally and look forward to mental stimulation.

Both males and females make excellent pets. Again, more myths plague this parrot when it comes to picking a pet Indian Ringneck. Males and females both make great pets. Some ringneck owners are told one sex is better than the other— this is nonsense. The parrot’s character and behavioral skills are learned at a young age and it really comes down to how well the parrot has been socialized to co-adapt with humans.

Ringnecks are known for their stable temperament and this makes them enjoyable to interact with. It’s believed that because ringnecks do not develop strong bonds towards other ringnecks, which is not true, they make lousy pets. The truth is both males and females will bond to their owners strongly. I find it more extreme in females than males. Females tend to guard their chosen person by chasing away intruders with lunging and biting. A female ringneck can be extremely loyal to her chosen person. Males just stay away from the people they do not like. Occasionally, I’ll come across an aggressive male who will not stand for another person or bird touching their chosen person.

These parrots make excellent pets and I hope you decide to bless yourself with an Indian Ringneck. Then you too can help to put to rest the many myths that surround these parrots.